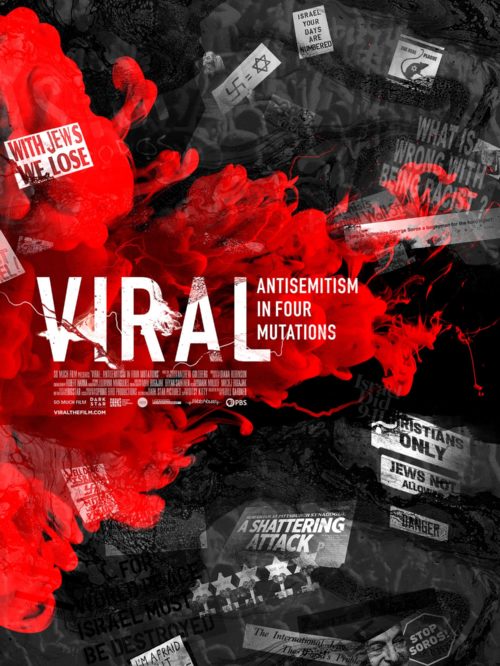 By virtually every yardstick, antisemitism in the US and Europe is rising and worsening in ways not seen since the 1930s. It is coming in the forms of vandalism, social media abuse, assault and murder. Like a virus it is mutating and evolving across cultures, borders and ideologies making it all but impossible to stop. Filmmaker, Andrew Goldberg, explores its infectious behavior in his film Viral: Antisemitism in Four Mutations as he travels through four countries to speak firsthand with victims, witnesses, anti-Semites, and interviews with Bill Clinton, Tony Blair, Fareed Zakaria, George Will, Deborah Lipstadt and others.

The film examines the far-Right in the US and how they have incited such acts as the mass shooting at the Tree of Life Synagogue in Pittsburgh, PA. In Hungary, we see its leader launch a massive campaign against Jewish Holocaust survivor and billionaire George Soros that is very reminiscent of Nazi propaganda. Moving to the far-Left in England, we see a traditionally antiracist party conflating Israel and Jews causing tremendous harm to the Jewish community, and in France, the film illuminates the seemingly endless wave of violence against Jews by Islamist extremists and radicals.

The increasing violence within each of these four countries, when reviewed holistically, paints a terrifying portrait of how this kind of global hatred begins and how easily it disseminates. And as activist Maajid Nawaz says in the film, « If we don’t draw a red line in the sand when it comes to antisemitism, Muslims will be next, gays will be next and everyone else who is deemed a
minority will be next.”