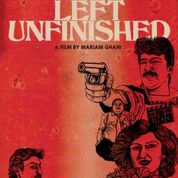 What we left Unfinished

During the Communist era in Afghanistan (1978-1991), films were weapons and filmmakers became targets. But despite government interference, censorship boards, scarce resources, armed opposition, and near-constant threats of arrest or death, Afghan filmmakers kept making films that at times were subversive and, in the filmmakers’ opinions, always « true » to life. What We Left Unfinished is the mostly true story of five feature films that were shot, but never edited, during this time, when the stories told onscreen merged with the fever-dreams of constantly shifting political regimes.