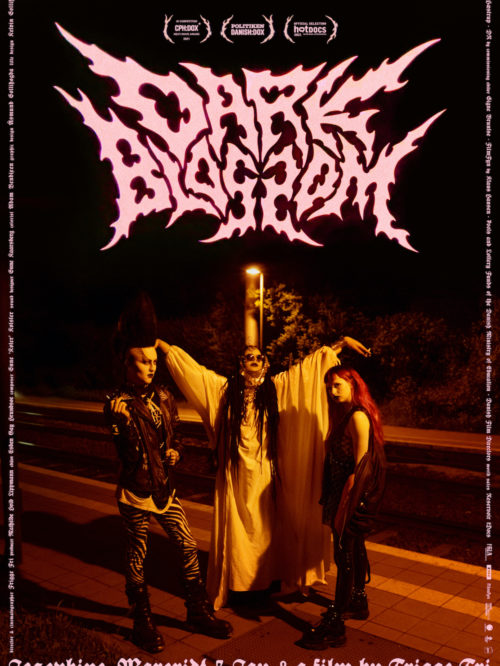 In the field behind her father’s farm, 20-year-old Josephine made a display of road-kills and left them to decompose in order to use the bones from the dead animals as jewellery. She was never a part of the handball clique, and her countless colourful wigs, the large and heavy nose ring as well as a stuffed baby bird in glass made her stand out in the small town in Denmark, where she grew up. But in her search for meaning and connection, she found two friends in the Goth culture – the expressive and constantly creative maximalist with the self-appointed name ‘Nightmare’ and the reflective and thoughtful Jay, who grew up in an Inner Mission home.

Armed with skulls, black makeup, wild outfits and high Mohawks, this Gothic trinity fights to gain control of and thus free themselves from their loneliness and inner demons as well as pressure from authorities, which they feel disturbed and controlled by. Together they create a space in which they can roam freely, push norms and conquer the world.

But one day, Josephine meets the beautiful guy, Jan, on Instagram and falls head over heels in love with him. After only knowing him for three months, she pursues her dream of getting out of the small town. They move in together in an apartment on the 14th floor in a suburb of Copenhagen, and as her black-beating heart starts to beat for something other than darkness, the precious trio friendship is put to the test.

« An illuminating glimpse into a closed culture which boasts an abrasive energy and humour. » - Screen Daily, Wendy Ide

Code of the Freaks

The End of Innocence

Mary-Jo Will See You At 4